Report by Björn, Photos by Les and Björn

The trip started very pleasantly at 6 p.m.
on Friday, with Kouichi taxiing the rest of the Tsukuba group
(Paul, Les and me) to the bus stop from where we took the highway
bus to Tokyo. After an uneventful bus ride to Ueno we had a very
good meal at a Korean restaurant and took a train to Shinjuku,
where we promptly met Elena and Simon. From Shinjuku we were going
to take a night bus to Hakuba, where we should meet Neil. Neil
had some kind of apparently very cheap rail pass, which unfortunately
allowed him only to take local trains, so he decided to spend
the night in various trains and train stations to meet us in Hakuba.
In Shinjuku we still had the illusion that the night bus would
be far superior to this in terms of comfort and convenience, though
were soon to be taught otherwise.
It started with the bus stop being in an
underpath of one of Shinjukus skyscrapers, which was apparently
also used to vent off the hot air from all the building's air
conditioners. So there we were in sweltering heat at 10:30 p.m.
waiting for about 1 hour for a bus which of course was there all
the time, had its engine running so the driver could have air
conditioning, and wouldn't let anybody in until a few minutes
before departure. When we finally were allowed into the bus, we
found that Paul's praise of Japanese night busses did not quite
fit this particular bus. Instead of the promised "Jumbo-jet
business class style" seats we found something more reminiscent
of a military transport with so little legroom that even I (182
cm) could only sit diagonally. To make matters worse, the first
couple of rows of seats had to be filled with peoples rucksacks
and it was impossible to convince the driver to have these moved
into the almost empty luggage compartment of the bus. After about
2 hours of this, Paul and Kouichi were lucky that the 2 Japanese
ladies sitting at the rear emergency exit (which had more legroom)
were willing to change places with them. In addition, to compensate
for the non-existence of a toilet on the bus, we stopped somewhere
every 2 or so hours. Needless to say that there was no sleep that
night.
We arrived at Hakuba Eki at something like
6 a.m. and met a comparably well rested Neil. After a little breakfast,
we took a local bus for Sarukura-sou, the starting point of the
hike. The 5 hour ascent to Choujou Shukusha hut over the famous
snow field went quite well considering our condition after the
bus ride. Fate and the remnants of a Typhoon struck again just
as Paul and Neil closed the hut door behind them. This was unfortunate
for the rest of us who were some 10 minutes behind them, so we
reached the hut totally wet. The original plan was to go on to
Hakuba-sou, with 1500 futons the biggest mountain hut in Japan,
some 20 minutes from where we were then, but when we found out
that the smaller hut had decent coffee, fabulous looking cakes
and draft beer, this plan was quickly abandoned. It also had complete
rooms to rent, which puzzlingly was cheaper than having just a
futon in a room for 40 if you are more than 3.5 people. Another
very convenient feature of the hut was a drying room, an essential
commodity for everybody but Paul and Neil. The food was also quite
good, at least compared to the usual hut food. All in all, we
can wholeheartedly recommend Choujou Shukusha hut for future hikes.

After a few beers we went to sleep at 1 p.m. (this is not a typo!)
to get some much needed rest, woke up again in the late afternoon,
had some more beers and went back to bed, not noticing too much
of the storm raging outside.
The next morning didn't see a big change in the weather, and we
didn't see anything at all because we were right among the storm
clouds. Anyway, at about 8 o'clock we set out with the thought
of the onsen driving us forward. The path we took went via Shiroumadake
(2932 m) and what was promised to us as a ridge walk with spectacular
alpine scenery. After almost missing the peak because of the poor
visibility we had a 3-second rest before Neil was getting us to
move on. Why was he in such a hurry, you might ask? Well, it might
have had something to do with the fact that he was still walking
in shorts when Paul said his hands were so frozen that he barely
managed to hold his ... when he had to pee. In Germany some people
measure apparent temperatures in units of length of their ...,
and on this ridge the temperature was no more than 2 cm. Elena
at some point was in danger of being blown away, and I noticed
that I was suddenly walking 2 meters further left when the wind
abruptly stopped behind a rock. So we stumbled on, hoping that
the trees on the descent would take away some of the winds force.
The storm stopped just when we left the
ridge for the descent to the long awaited onsen, and looking back
to where we have been we could see that the ridge walk could really
have been beautiful. Well, maybe next year! At a small hut that
served hot cocoa we took a break and our raingear off, and continued
the rest of the walk in beautiful sunny weather.
After a well deserved soak in the onsen,
we opted for ultimate comfort for the trip back and ordered taxis
to Hiraiwa-eki, boarded a local train to the next larger station
and a limited express train from there to Tokyo. From the train,
we could see that the first snow had fallen on Fuji-san, and generally
enjoyed great views of the Japanese Alps in beautiful sunshine.
Why wasn't it like this when we were on the ridge just a few hours
ago?
To complete our journey, the highway bus finally brought us back
to Tsukuba at about 9 p.m. on Sunday evening.
Thank you Neil for organising a walk that
was very nice (apart from te weather on the ridge for which he
cannot really be held resposible).
Paul (looking like an Orang-Utan)
on the way up through the snowfield. 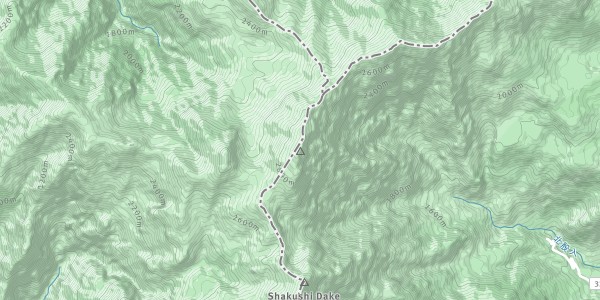