Report by Sveta and Nicolas:
We had announced that the Nyoho-san hike would be challenging and it was but everybody came back happy and safe!

After a (small) car problem we finally reached Nikko around 11:30 and started hiking around 12:00 (after visiting the shrine dedicated to

the famous Sake waterfall near the start of our hike). We paid a visit to the shrine dedicated to the travellers at the foot of

Nyoho-san and then we (Alexander, Daniel, Sveta and Nicolas) started climbing.
The first day was fine and we started with a relatively good pace, faster than the map time, but after a few hours we became slower...

After a day during which we had almost meet nobody we could have expected to be alone at the emergency hut, but in fact it was already packed and we hardly found 4 spots to sleep...
We considered camping around the hut but we found no suitable place (the area of the hut is very rocky).

The water point that was supposed to be near the hut was in fact 10 minutes away, down a steep path!
One of us went to get water before the dinner and two of us had to go in the dark after dinner! We went to bed around 20:30 tired by the 1700 meter that we had climb during that first day.

Some of us had a very nice sleep during the night while some other spent the night listening the concerto of the many snorer that were in the hut...

The next morning we woke up at 3:30 (yes, 3:30 on a Sunday morning!!!) very surprised to see that none of the Japaneses who were in the hut had already rushed to the summit to enjoy the sunrise.

After a cup of tea and a few biscuits for breakfast, we walked down to the famous "Fuji-view pass". On the way Alexander found a (small) patch of snow to refresh his feet. The pass itself was rather disappointing as it is a saddle surrounded by trees (and thus there is no view on mount Fuji or even on Nyoho-san and Nantai-san!).

Alexander and Sveta took a bypass to go directly to the foot of Nantai-san.

The ascent of Komanago-san is very steep and rocky while to climb Omanago-san one follows a path accross the forest. The trail going down from Omanago-san to Nantai-san has some passes with chains and ladders (but nothing terrible).

On the bypass Alexander and Sveta walked about 10 minutes and then saw 2 roads splitting. There they met a Japanese person, who was also wondering which way to take. He checked his GPS and suggested a way. They decided to follow him even if after checking the map they were not sure that was a good way. It was a way of a river with dams and many big and small stones, hard to walk but interesting.
Once they even had to use a rope to go dawn.
It took them 2 hours and then we had to climb a bit to reach a road leading to the foot of Nantai-san. They lost a lot of time in that
riverbed and the Japanese man felt sorry and gave them a ride in his car to the foot of Nantai-san once they reached the road.

Sveta waited for Nicolas and Daniel on her way to the summit of Nantai-san while Alexander went directly to the car.

We all started climbing around noon and soon we realized what everybody has read in the news on Monday: the rainy season was in advance and had just started!

It started with a thin rain but at the summit of Nantai-san (2485) it was a chilly rain with a cold wind, thus we rushed to a shelter near the
shrine were we ate a snack. The descent to lake chuzenji was also very rocky in its first part and muddy and slippery at the end. We were well
beyond the map time (it took us 4 hours instead of 2h35). We reached the lake around 18:45. Then we took a bus to go back to Nikko.

During that time Alexander had walked back along the road from Chuzenji to Nikko and we met him in the shrines of the ancient Nikko not very far from the car!

We have hiked 14 hours the second day and a total of 21 hours over the week-end, so we were rather tired! Some of us have climbed more than 3000m (total vertical ascent) with a backpack weighting more than 16kg!

If you want to check how fit you are, I recommend you to give a try to this hike!

A few things to know for those planning to do this hike in the coming years-> Chlorine or iodine pills can help even if the water is supposed to be "pure" near the hut (some of us had stomach problems after drinking the water)
-> Filter are not necessary as the water comes out from a pipe
-> Tents might not be necessary as Nyoho-san is very rocky (and thus sleeping under a tent would be very uncomfortable) but the hut can be crowded.
-> The lightest you sleeping bag is, the better it is, especially in the rocky parts 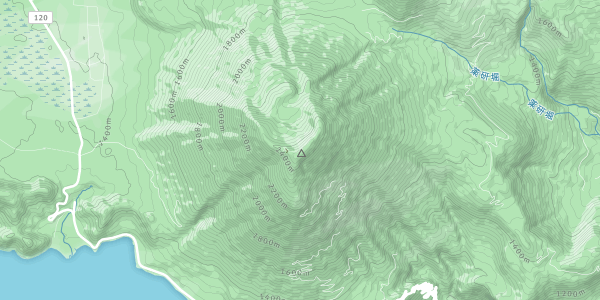